The new DNA 40 chip set from Evolv has arrived and it’s different.
Some lucky reviewers have had these in Hana mods for the past month beta testing and now they are finally allowed to talk about it.
What they have said makes interesting listening as the changes go far beyond just upping the power.
By all accounts the new Evolv DNA 40 chip can enable a temperature sensing control mode, this let’s you to set a limit to the heat of the coil which the mod will not exceed.
To take advantage of this though requires that you build you coils from nickel very low resistance wire.
Apparently controlling the temperature helps prevent you from burning your juices so improving your flavour and not releasing potentially harmful chemicals from the liquid.
The jury is still out on the subject of harmful chemicals and I personally think that judicious use of the wattage control would have the same effect regarding flavour production. 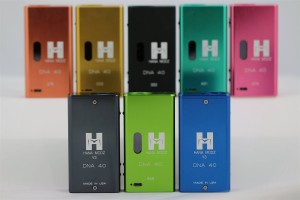 Thousands of these will be sold over the next few weeks as this is bound to be the next must have item just as the Evolv DNA 30 was six months ago, it will be interesting to see what people make of Evolv DNA 40.