How Does It Vape

Would I Buy Again

A lot has been said ablout the Billow how it is the Lemo beater, well I am not too sure to be totally honest. 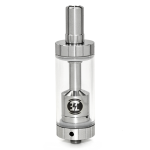 It does have a lot going for it like the two large 2.5mm airflow holes and the air traveling up and undermneath the coils giving a nice flavour production for this rebuildable tank atomiser.

Also holding 5ml of juice and having 2 positive connections on the center post.

A nice drip tip comes with the device with a 7mm bore going down to a 4mm.

But where I feel this Billow was really letting itself down was the terminal connections for the positive and the negative resistance wire.

Each time I tried to get a good connection no matter which guage of Kanthal I used the screws would cut through the wire, Angelfire mods where I got the device from did send out some new screws for me which just did the job, but the screws were then to short meaning that when tightening down the connection the top of the screw would hit the top of the post.

One thing that is important for coiling a RTA is the electrical connection
The Billow would be so much better if theses issues were solved and would be one of the highest rated tanks around.

See the Video Review of the Billow here,